(IDN) - A ground-breaking report by a high-level commission, headed by former British Prime Minister Gordon Brown, has tabled a series of far-reaching proposals for an urgent reform of the United Nations Human Rights architecture. 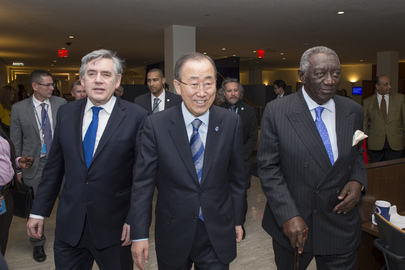 Composed of some of the world’s notable public leaders and thinkers, the Global Citizenship Commission (GCC) asks the international community to “recognize that asylum seekers have three rights that should not be forgotten: a right to security in transit; a right to a fair and responsible process at borders; and a right to good reason for a refusal to allow entrance or settlement”.

Further: “An international children’s court should be established, and the UN Security Council should convene a ‘Children’s Council’ – an annual review on violations of children’s rights.”

The report, titled The Universal Declaration of Human Rights in the 21st Century, contains the findings and recommendations of the GCC, convened under the auspices of New York University to renew the 1948 Universal Declaration of Human Rights (UDHR) for the twenty-first century. It was presented to Secretary-General Ban Ki-moon at the UN’s headquarters in New York on April 18.

The Commission’s Chair Brown said: “Since 1948, the Universal Human Rights Declaration has stood as a beacon and standard for a better world. Yet at a time of enormous global change, a refugee crisis bigger than that which accompanied the ending of the Second World War, the increasing twin threats of terrorism and extremism, and the appalling abuse and suffering of women and children in conflict and other situations, we need to renew and revitalize our efforts to realize the rights articulated in the Declaration.

Jeremy Waldron, who chaired the GCC Philosophers’ Committee, said: “This report refreshes our understanding of the Universal Declaration of Human Rights, which has dominated human rights thinking since 1948. It reaffirms the fundamental commitments of the UDHR; it proposes ways in which those commitments can be carried forward to meet new challenges. Above all, it identifies the UDHR as a pillar of our global ethics and our global responsibilities.”

The report also recommends that the UN should consider the creation of a World Human Rights Court, consistent with the principle of complementarity. The International Criminal Court should investigate and prosecute crimes against children within its remit to the full extent of the law.

At the national level, says the GCC, all states should create accessible complaint mechanisms for the resolution of violations of the rights of children, and consider establishing a Youth Parliament, Children’s Commissioner, and dedicated budget for Children.

The international community should implement Target 10.7 of the recently adopted Sustainable Development Goals, which calls for states to “facilitate orderly, safe, regular and responsible migration and mobility of people, including through the implementation of planned and well-managed migration policies.”

The report asks all governments, international organizations, and NGOs to encourage and support human rights education.

According to the report, although human rights are important for a global ethic, they are only a part of it. Other pillars of a global ethic include:
These pillars are related to one another and they form an integrated system, says the report. Each of them has pivotal human rights dimensions but each of them also takes us beyond the field of human rights and opens up broader vistas of global obligation and participation.
“One way of thinking about human rights requirements is that they secure the foundation on which people can exercise and construct their citizenship responsibilities, whether in their own countries or in the world at large. Without the protections and liberty that human rights are supposed to secure, it would be difficult for people to lift their gaze beyond their immediate fears and deprivations,” argues the report.

The Commission thinks it is imperative, therefore, to reaffirm that human rights in general and the UDHR in particular contribute immensely to the emergence of a global ethic. A global ethic is not the same as international law. It is something like the shared moral impulse that underlies and sustains international law.

“Many things need to be comprised in a global ethic cannot be laid down in precise legal terms. At the same time, the reality of human rights institutions and the evolution of international human rights law – along with national and regional declarations of rights, and their accompanying courts – demonstrate that it is possible to build real-world institutions and practices upon these ethical foundations,” mains the report.