Global Citizenship Growing in Sentiment Among Citizens of Emerging Economies

27 April 2016 - For the first time in 15 years of tracking by GlobeScan, findings indicate that nearly one in two people (49%) surveyed across 14 tracking countries see themselves more as global citizens than citizens of their country. This sentiment is being driven by citizens of large emerging economies, according to a new poll for the BBC World Service.

The poll, conducted by GlobeScan among more than 20,000 people worldwide between December 2015 and April 2016, is being released as part of the BBC World Service Identity Season—a Spring season of broadcasts on the World Service’s 27 language services exploring stories about how people identify themselves around the world.

Among all 18 countries where this question was asked in 2016, the poll suggests more than half (51%) see themselves more as global citizens than citizens of their country, against 43 per cent who identify nationally. This is the first time since tracking began in 2001 that there is a global majority who leans this way, and the results in 2016 are driven by strong increases since 2015 in non-OECD countries including Nigeria (73%, up 13 points), China (71%, up 14 points), Peru (70%, up 27 points), and India (67%, up 13 points).

Looking at the 14 tracking countries that have been surveyed repeatedly since 2001, a growing divide appears on the topic of global citizenship between respondents from developing economies and those from industrialized countries. At the height of the financial crisis in 2009, views were fairly similar across the two country groupings, with 48 per cent in seven OECD countries seeing themselves more as global citizens than national, and 45 per cent in seven non-OECD countries. This sentiment has continued to grow at a strong pace since then among respondents in emerging economies to reach a high of 56 per cent in both 2015 and 2016. Conversely in seven OECD countries it has followed an opposite trajectory, dropping to a low of 39 per cent in 2011 and remaining at low levels since (now at 42%). This latter trend has been particularly pronounced in Germany where the poll suggests identification with global citizenship has dropped 13 points since 2009 to only 30 per cent today (the lowest since 2001).

The poll also asked about the level of approval for different demographic developments changing the population make-up of their country, and results indicate public opinion is generally quite supportive of a number of trends shaping global society. In the 19 countries surveyed for this series of questions, three quarters (75%) of respondents approve of intermarriage between different races or ethnic groups, and more than six in ten (63%) approve of immigration from other countries (with 31% disapproving). Similar degrees of openness are observed on accepting refugees, with 62 and 57 per cent respectively supporting their country admitting refugees fleeing conflict generally, and from Syria in particular. On all of these statements, German attitudes stand out due to the unusually high percentage of respondents choosing “neither agree nor disagree,” or that it “depends.” A majority of Germans (54%) nonetheless approves the acceptance of Syrian refugees.

GlobeScan Chairman Doug Miller commented: “The poll’s finding that growing majorities of people in emerging economies identify as global citizens will challenge many people’s (and organizations’) ideas of what the future might look like.” 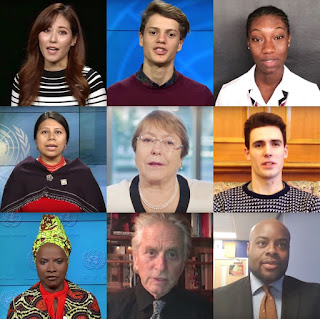 An additional question on the poll gave respondents a broader range of options to reflect on how they consider their identity. Results reveal the complexity of the issue and show how people can identify in different ways.

When offered a choice between five distinct identities, more than one in two citizens (52%) across 19 countries define their most important identity as citizens of their country, outnumbering those who view themselves as being a world citizen (17%), a resident of their local community (11%), or who identify themselves primarily through their religion (9%), or their race or culture (8%). Out of 19 countries, majorities or strong pluralities in 16 countries describe being a national citizen as the most important feature of their identity. National citizenship is the strongest in Kenya (84%) and Ghana (81%), followed by Russia (70%), Nigeria (68%), and Chile (64%).

Three countries stand out in the way their populations think about self-identity. Spaniards are by far the most likely to identify with world citizenship (54%). For 56 per cent of Indonesians, belonging to their local community is the strongest defining identity. And for Pakistanis, a strong plurality (43%) identify first as a member of their religion.

The results are drawn from a telephone and in-person survey of 20,823 adult citizens across 21 participating countries in total. Not all questions were asked in all countries. The poll was conducted for the BBC World Service between December 2, 2015 and April 15, 2016 by the international opinion research and consultancy firm GlobeScan and its national research partners. Within-country results are considered accurate within +/- 2.8 to 3.7 per cent 19 times out of 20. Urban-only samples were used in Brazil, China, Indonesia, and Kenya.

For participating countries and detailed findings, see below. For full methodology, question wording, and research partners, please see the drop-down links at the bottom of this article.

Urban-only samples were used in Brazil, China, Indonesia, and Kenya.

GlobeScan conducts research in over 90 countries and is a signatory to the UN Global Compact. Established in 1987, GlobeScan is an independent, management-owned company with offices in Cape Town, London, San Francisco, Sao Paulo and Toronto. For more information, please visit www.GlobeScan.com

About BBC World Service BBC World Service is an international multimedia broadcaster, delivering a wide range of language and regional services on radio, TV, online and via wireless handheld devices. It uses multiple platforms to reach its weekly audience of 166 million globally, including shortwave, AM, FM, digital satellite and cable channels. Its news sites include audio and video content and offer opportunities to join the global debate. BBC World Service offers its multilingual radio content to partner FM stations around the world and has numerous partnerships supplying content to news websites, mobile phones and other wireless handheld devices as well as TV channels. For more information, visit bbcworldservice.com