The 'People's Democratic Public Diplomacy Movement' has won over the attention of the entire globe, it is democracy pure and simple, people want peace and they will have it this day. Thinking about it a little more, it is very clear to see that diplomacy and progress cannot occur with dis-accord, war, famine and injustice, we need to find common ground to establish equality and harmony on the planet, what a great start to unite all people and start a global conversation. Peace it is so simple and so pure and a common need of mankind. 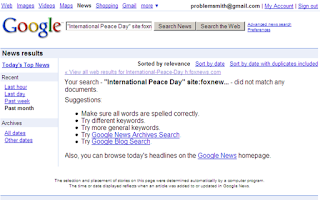 It is obvious to me though that not everyone wants peace on earth; not even on this special day or even recognizes this day as necessary for the people or their readers, viewers or listeners. A few moments ago at 10:04 AM, I searched "International Peace Day" and "Fox News" and learned that they have not even mentioned this day. It all boils down to being a good citizen and is unnerving to see a supposedly prestigious network like FoxNews defy the will of the public and abstain from spending a single minute for an international awareness event that has captured the attention of so many people, world leaders and other news agencies. They say they are part of the mainstream media, but their abstinence and failure to recognize such an important event and observance worries me that they are the instigators of war and hatred. 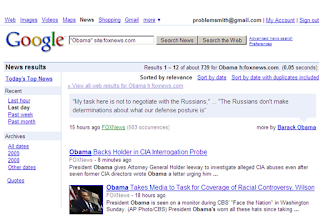 They have on the other hand managed to mention, attack, and question the motives and work of US President Barack Obama 739 times in the last 24 hours. It is absolutely beyond me how a news network that serves millions to have such hatred and venom in their heart. Perhaps it is not a conspiracy, but I am positive it is not a coincidence, especially knowing that they have received over 100 news releases from all sorts of organizations relative to this day including the United Nations, Buckingham Palace, and the White House. Simply abominable, if a civil war or racial riots break out in the United States anytime soon, they will surely be responsible. As a strategist, I constantly watch them just to be informed as to where they stand and to know what the so called conservatives are doing. Which side are they on? Can they continue to be considered the right wingers if they are so far to the left of democracy and the will of the people?

Here are two screen captures to illustrate my point. Question everything said and reported on by Fox News. As an international strategist I watch them everyday, just to be aware of what is going on from all perspectives. I must say I enjoy watching them from here in Caracas, Venezuela as well, they have very good segments and informative stories; I know now though more than ever that they cannot be trusted to report on good news and that they are part of some higher agenda that is not very nice toward the people I help and work with everyday.

International Peace Day, September 21, 2009: The International Day of Peace occurs annually on September 21. It is dedicated to peace, or specifically the absence of war, such as might be occasioned by a temporary ceasefire in a combat zone. It is observed by many nations, political groups, military groups, and peoples.

To inaugurate the day, the "Peace Bell" is rung at UN Headquarters in New York City. The bell is cast from coins donated by children from all continents. It was given as a gift by the Diet of Japan, and is referred to as "a reminder of the human cost of war." The inscription on its side reads: "Long live absolute world peace. Source: Wikipedia

If you are on Facebook or involved in social network platforms find the time to do a mini-post, write a story or form an opinion about International Peace Day today.

There is no other agenda more important today than International Peace Day. So far it has become the most successful social network observance event ever in history.

To follow us on Facebook and enjoy some of our programs that strive for a better world use these links below to our awareness campaigns. Here are three of many public awareness initiatives.

Editor's note: Just to make sure and give FoxNews the benefit of the doubt I made an additional search at 10:30 AM EST under a number of different parameters, I am sorry to report that I found 0 (zero) stories, written, televised or on any radio network they have or are affiliated with anywhere in the United States. FoxNews is owned by NewsCorp a powerful and influential news network watched by tens of millions of people worldwide.

Lets see if FoxNews changes their poor reporting and abstentionism toward world peace by day's end.

Here is the exact search parameter I created to follow Fox News: http://tinyurl.com/FoxNewsPeace

All fellow Ambassadors, Fans, other Bloggers, Governments and International Agencies are welcome to post this article and make quotes without requesting permission.