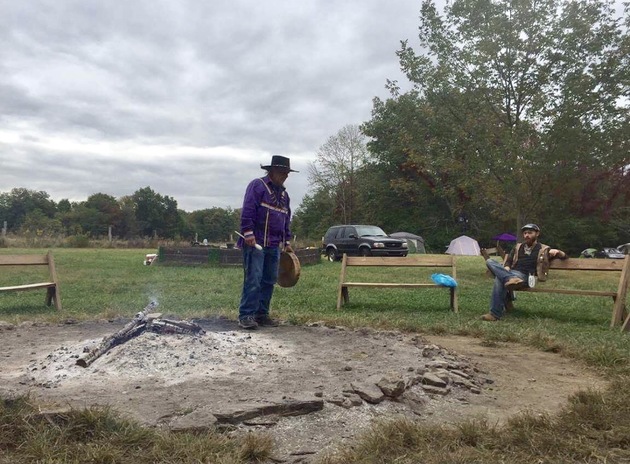 
“Few have been ignored by Washington for as long as Native Americans.”

Almost exactly one month after mass protests spurred government intervention in the construction of the Dakota Access Pipeline (DAPL), the United States’ observance of Columbus Day is a timely reminder that there is still much work to be done to preserve and restore Indigenous American Indian culture.

Columbus Day has been observed in the U.S. every October since 1937 to celebrate the day Christopher Columbus “discovered” the new world—except that he was actually quite far from being the first person to settle in North America. And let’s not forget that his “discovery” set off a chain of events that would ultimately lead to the decimation of most of the Indigenous American people, their land and their culture.

I spoke with Western Cherokee medicine man Jason Rios, one of the thousands of Indigenous American Indians who stood in peaceful protest of the pipeline, which they say will disrupt waters and lands sacred to their people. The pipeline protest is perhaps the most significant since a 1970’s protest connected to the Wounded Knee Massacre, where hundreds of their ancestors (mostly unarmed elders, women and children) were shot 'in mass' by U.S. forces on their reservation in South Dakota over a century ago.

Columbus Day is a timely reminder that there is still much work to be done to preserve and restore Indigenous American Indian culture.

Rios, who is also a father of three and a leader of an independent branch of the Oklevueha Native American Church, told me that the pipeline and the observance of Columbus Day are just two of many ways in which the United States government continues to neglect to recognize his people’s culture.

“It reeks of a repeat of Wounded Knee almost 100 years later, and we have the FBI, National Guard, mercenaries and more all out there against peaceful and prayerful water protectors who are only engaging in non-violent direct action,” Rios said. “We still have genocide occurring today, but carried out on paper, as the pen is mightier than the sword with blood quantums.”

Rios went on to mention Leonard Peltier, an Indigenous American activist who many believe was wrongfully imprisoned on murder charges after the Wounded Knee protests over 40 years ago. While the government has yet to budge on releasing Peltier from his life sentence, the DAPL victory is a step in the right direction for Indigenous Americans hoping to use passionate but peaceful protest methods to make their voices heard.

“[The protest] was truly life-changing,” Rios told me. “It solidified, for me, all that I’ve been doing and working towards my entire life. I stood in solidarity with over 200 Indigenous nations against big corporations, big oil, and against an oppressive government.”

While President Obama’s move to block further construction of the pipeline was certainly surprising, it wasn’t the first time he’s made an effort to help rebuild relations with Rios and his people. Along with praising the president for his action regarding the pipeline, Indigenous American Indian leaders also credited him for keeping his promises while meeting at Obama’s final White House Tribal Nations Conference last week.

“Few have been ignored by Washington for as long as Native Americans—the first Americans,” Obama was quoted as saying during his 2008 candidacy.

It’s hard to argue Rios’ point, especially if you consider the current state of Indigenous American Indian reservations. According to the Pew Research Center, the poverty rate at some reservations is nearly triple the national average. They also have higher rates of homelessness and high school dropouts.

According to the True Sioux Hope Foundation, the 29,000 Indigenous people on their reservation are living in third-world conditions. Their website states that the average home has nearly 20 people living inside of it, with over 90 percent of the reservation’s residents living unemployed and below the poverty line.

Furthermore, government healthcare provided for Indigenous American Indians has been described by one U.S. Senator as grossly underfunded and “horrifying.” Despite having little money, Rios and his church provide all of the goods and services to their patients free of charge.

“I got very sick in 2008-2009 and with the housing crisis, it resulted in me losing our home, having to file medical bankruptcy, and having my vehicle repossessed,” Rios told me. “Fast-forward to today... I’m homeless in the sense that I don’t have my own place, but we are staying at my mother’s until we get our own. Yet, I choose not to go back into the corporate world and be a slave in their system.”

Instead, Rios opts to devote his time to traveling coast-to-coast with his “elder” Carlo Hawk Walker on behalf of his church to provide free ceremonial and medicinal services to those who need it most.

“Carlo is the 6th Keeper of Sitting Bull’s Pipe,” Rios mentioned. Sitting Bull was an iconic Indigenous American chief and medicine man, so possessing a pipe associated with him carries significant honor and respect. “He is also a Sundancer, Sundance Chief, Peace Maker, and a Medicine Man,” Rios said, adding later that Carlo is also a Vietnam veteran.

Rios and Carlo work with other independent church branches and members to raise goods, as well as utilizing tax-deductible donations to ensure everything is cost-free for their patients. Unfortunately, their work is often impeded by outsiders that are either ignorant of or unwilling to accept native customs and traditions.

[We must] keep the widespread discrimination against Indigenous American culture in the spotlight as we continue to approach the day commemorating the genocide of their people.

As registered native medicine men, Rios and Carlo almost always travel with a sacred medicine bag containing natural herbs, medicines, and various other items used for native religious ceremonies—some of which are not legal for an ‘ordinary citizen’ to carry. While all Indigenous American Indians are legally exempt from laws prohibiting the possession of things like eagle feathers, only registered churches such as Rios’ can utilize the religious exemption from laws banning the transport of plants like peyote or marijuana. Rios must carry nearly 100 documents with him in his healing bag at all times to prove the authenticity of his medicines, his church’s practices, and his various other cultural belongings.

“When I travel, I travel as a medicine man at large, and through our organizations, I should be considered an Ambassador,” he explained. “Even outside of U.S. Law, there are international laws for Indigenous People. So in dealing with me, all agencies have a different set of rules that they have to abide by.”

It seems clear that all parties would benefit from a universal standard for safe travel of Indigenous religious leaders, or a pre-screening program such as NEXUS to expedite the travel of Indigenous American holy men and cultural practitioners. Without this, Rios and other native holy representatives are often held up, subjected to lengthy and humiliating searches, or denied access completely—even when they have the appropriate paperwork.

Rios recalls a recent instance when a member of their church asked him and his associate Aleka Bassett to visit and treat the church member’s wife at an ICU in Michigan.

Rios said that he and Bassett made the trip to Michigan to treat a fellow church member’s wife, who they were told might not have much time left. After arriving in their patient’s room and confirming with its shared occupant that she was comfortable with them practicing their medicines (there is no smoke, drugs or singing involved) and rituals, they began to go to work healing their patient. Before long, however, their work was disrupted by hospital staff unsure of what was taking place.

“We were ultimately escorted out of the hospital by the acting director and a three-team security detail,” Rios said. “They were on the phone with their legal department and still trying to figure everything out. The patient’s husband had to leave, too.”

“If it were a Christian patient in the hospital bed, the hospital would not only have welcomed but encouraged a priest to come in,” Rios continued. “But as Indigenous People, our spiritual leaders are kicked out with three-team security details.”

Rios’ experience is not an isolated one. Another medicine man, Chief Arlen Dumas, recently filed a formal complaint against an aggressive security guard who harassed and accused him of smuggling drugs through an airport earlier this year. Dumas had been traveling home with his 16-year-old son who was born with cystic fibrosis and was on his way to receive a medical check up for a recent double-lung transplant.

It’s important that we keep the widespread discrimination against Indigenous American culture in the spotlight as we continue to approach the day commemorating the genocide of their people. Rios and other activists know they must continue to fight for change. The Hill reported on Monday that five of the biggest labor unions in the country representing over 3 million workers are asking the government to once again allow construction on the DAPL to resume.

“I can go on forever about what is transpiring and how deep this goes,” Rios said of the pipeline. “It’s a shame.”

“But there is no greater cause nor any greater honor than to make this stand, as it is for all life and all future generations to come. It is for the preservation of our way of life, culture, heritage, as well as for our ancestors.”

This article is a "re-post" from the Huffington Post, written by Chaker Khazaal the views and content presented are based on the author's original research and are not necessarily those of Globcal International.

When people defy "common knowledge and understanding" with ignorance in the light of the truth they are considered either rebels, corrupt or perhaps are just downright uneducated! This may be the case when it comes to a majority of the United States House of Representatives, the United States Senate and the President of the United States, Barack Obama through their continued recognition of Columbus Day during our contemporary era of human rights and social justice.

Leaders are supposed to serve the population democratically through the representation of the people's collective will and majority vote, anytime this balance gets out of line through state-sponsored propaganda by considering the will of one group that is lesser than another corruption is taking place, it is plain and simple.
They believe they are somehow excused from perpetuating falsehoods because they see 'good works' funding (100s of millions of dollars) from some of the oldest and most respected religious organizations in the United States to ignore the academic reality of history, even notable historians and the same people's social justice movement they instigated. It is a total sham and a huge embarrassment to be involved or support their so-called misguided innocence which is translated to justified ignorance considering the preponderance of information to the contrary from the most respected universities and institutions in the world.
If we dig deeper we discover that some of the universities themselves are being quiet as well because they also receive charitable funding to keep quiet about Christopher Columbus and his genocidal campaign against the Indigenous peoples almost 525 years ago when he actually fed his dogs 'live' indigenous people.