This Tiny Country Thinks Virtual Citizens Will Make It Rich

Estonia aims to bring 10 million people to its digital shores.

Started two years ago, e-residency gives citizens of any nation the opportunity to set up Estonian bank accounts and businesses that use a verified digital signature and are operated remotely, online. The program is an outgrowth of a digitization of government services that the country launched 15 years ago in a bid to save money on the staffing of government offices. Today Estonians use their mandatory digital identity to do everything from track their medical care to pay their taxes.

Now the country is marketing e-residency as a path by which any business owner can set up and run a business in the European Union, benefiting from low business costs, digital bureaucratic infrastructure, and in certain cases, from the country’s low tax rates.

“If you want to run a fully functional company in the EU, in a good business climate, from anyplace in the world, all you need is an e-residency and a computer,” says Estonian prime minister Taavi Rõivas. 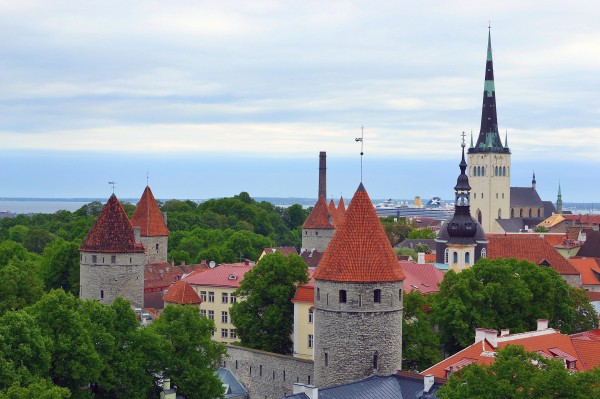 Things that don’t come with e-residency include a passport and citizenship. Nor do e-residents automatically owe taxes to the country, though digital companies that incorporate there and obtain a physical address can benefit from the country’s low tax rate. The chance to run a business out of Estonia has proven popular enough that almost 700 new businesses have been set up by the nearly 1,000 new e-residents, according to statistics from the government.

The government hopes to have 10 million e-residents by 2025, though others think that goal is a stretch.

Estonian officials describe e-residency as an early step toward a mobile future, one in which countries will compete for the best people. And they are not the only ones pursing this idea. Payment company Stripe recently launched a program called Atlas that it hopes will boost the number of companies using its services to accept payments. It helps global Internet businesses incorporate in the state of Delaware, open a bank account, and get tax and legal guidance.

Juan Pablo Vazquez Sampere, a professor at Madrid’s IE Business School, sees the Estonia program as enabling global entrepreneurs to operate in Europe at a fraction of the cost of living in the region.

Last year, Arvind Kumar, an electrical engineer who lives just outside Mumbai, left his 30-year-career in the steel industry to start Kaytek Solutions OÜ, which creates models to improve manufacturing quality and efficiency. Last September Kumar flew to Tallinn, the capital of Estonia, and spent half a day setting up a bank account and a virtual office. In addition to the price of the trip, initial setup costs were around $3,300 (€3,000), and he has ongoing expenses of about $480 (€440) a year. The Indian system of setting up a new business is “tedious” by contrast, says Kumar—time-consuming, difficult, and expensive.

Cost was also a factor for Vojkan Tasic, chairman of a high-end car service company called Limos4, in his decision to pick Estonia as a new home for the company. Started in his home country of Serbia six years ago, Limos4 has been paying credit-card processing fees of 7 percent. Limos4 operates in 20 large European cities as well as Dubai and Istanbul, and counts Saudi Arabian and Swedish royalty and U.S. and European celebrities among its clients.

After considering Delaware and Ireland, Tasic chose Estonia, where he can settle his credit-card transactions through PayPal subsidiary Braintree for 2.9 percent and where there is no tax on corporate profits so long as they remain invested in the business. Since getting his e-residency and moving the company to Estonia, profits are up 20 percent, Tasic says. Annual revenue is around $2 million.

For Estonia, the financial benefit comes from the fees e-residents pay to the government and the tax revenue local support services like accountants and law firms make.

To Tasic, who runs background checks on all his drivers, one of the best things about the e-residency is the fact that the Estonian police investigate every applicant. Since Kumar set up his company, Estonia has begun allowing e-residents to set up their bank accounts online, but there remains a level of security, because to pick up their residency card, applicants must go in person to one of Estonia’s 39 embassies around the world and prove their identity.

Some have raised concerns that the e-residence might attract shady characters who could shield themselves from prosecution and possible punishment by doing business in Estonia but residing outside of its jurisdiction. But with no serious cases of fraud or illicit activity to date, it is unclear whether this is a serious concern, says Karsten Staehr, a professor of international and public finance at Tallinn University of Technology.

As with any digital system, security is a major concern. Estonia, which sits just to the west of Russia and south of the Gulf of Finland, recently announced plans to back up much of its data, including banking credentials, birth records, and critical government information, in the United Kingdom.

In 2007 the country suffered a sustained denial-of-service cyberattack linked to Russia after moving a Soviet war memorial from Tallinn city center and has run a distributed system for some time with data centers in every embassy in the world.

“I am convinced they are doing a good job,” says Tasic, who holds a PhD in information services. “But with increased attention, the attacks will increase, so let’s see what the future is.”

As the Senior Editor for business, I focus on stories about technology’s impact on industry and the way we work. Areas of interest include how innovation is fostered and funded, and how people interact with technology and its social impacts. In addition to reporting and writing stories, I edit a group of talented staff and freelancer writers who aim to produce stories and data-driven content that is surprising, insightful, and important. Prior to joining MIT Technology Review and jumping into the world of emerging technology, I worked as a reporter and editor at BusinessWeek, Reuters, and SmartMoney, covering topics from boardroom shakeups to financial meltdowns. Leads on good stories are very welcome. Please send them to nanette.byrnes@technologyreview.com.

Col. Wright currently works for Globcal International as the Administrator, General Counsel and Editor-in-Chief for 15 domains, he became a Kentucky Colonel under Governor Paul Patton in 1996 for distributing a million tree saplings from Kentucky to disaster victims in other states, in 1998 he published the first website © for Kentucky Colonels, and in 2009 he published the first original news source for Goodwill Ambassadors establishing online copyright privileges.