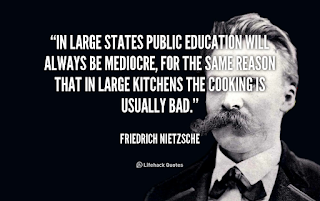 The Global Citizen: What's So Great About Being Big?

Meadows writes: "A new book [Downsizing the U.S.A.] says we are so ticked off because things -- from cities to corporations to governments to schools to the whole economy -- are too big. We pursue quantity instead of quality, go for more and lose sight of enough. Our unthinking devotion to growth drive us to create economic and social monsters that drive us, instead of serving us."

"I think we need to find out why the citizens of the world's wealthiest, most envied, most powerful country are so cynical, so distressed, so angry, so ticked off about so many things." (William J. Bennett, former Secretary of Education)

That quote comes from a new book that says we are so ticked off because things -- from cities to corporations to governments to schools to the whole economy -- are too big. We pursue quantity instead of quality, go for more and lose sight of enough. Our unthinking devotion to growth drive us to create economic and social monsters that drive us, instead of serving us.

The book is "Downsizing the U.S.A." (Grand Rapids MI, William B. Erdmans Publishing Company, 1977) by Thomas H. Naylor and William H. Willimon, who are a former economics professor and chaplain, respectively, at Duke University. Naylor and Willimon lace their book with quotations from other folks that in themselves make their points.

On too-muchness in general: "There seems only one cause behind all forms of social misery: BIGNESS. It appears to be the one and only problem permeating all creation. Wherever something is wrong, something is too big." (Leopold Kohr, "The Breakdown of Nations")

"To the size of states there is a limit, as there is to other things, plants, animals, implements; for none of these retain their natural power when they are too large or too small, but they either wholly lose their nature or are spoiled." (Aristotle, "Politics," 322 B.C.)

On some of the reasons for it: "I want to see what it's like to be big!" (Ted Turner)

"Almost every deal I have ever done has been at least partly for my ego -- and I have made a great deal of money and have had both fun and artistic enjoyment because of this." (Donald Trump)

Bigness as applied to cities: "Great cities are too huge to provide the values of community. Community demands a place where people can see and know each other, where children can play and adults work together and join in the pleasures and responsibilities of the place where they live." (Robert Kennedy)

"The upper limit of what is desirable for the size of a city is probably something of the order of half a million inhabitants. It is quite clear that above such a size nothing is added to the virtue of the city." (E.F. Schumacher, "Small is Beautiful") 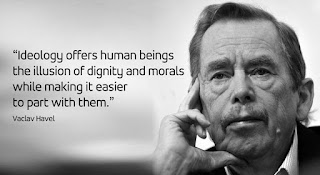 And corporations: "It is well known ... that enormous private multinational corporations are curiously like socialist states. With industrialization, centralization, specialization, monopolization, and finally with automation and computerization, the elements of depersonalization and the loss of meaning in work become more and more profound everywhere." (Vaclav Havel)

And the economy: "Although I have made a fortune in the financial markets, I now fear that the untrammeled intensification of laissez-faire capitalism and the spread of market values into all areas of life is endangering our open and democratic society. The main enemy of the open society, I believe, is no longer the communist but the capitalist threat." (George Soros)

And consumption: "America's thousands of shopping malls are the centerpieces of the most environmentally destructive way of life yet devised. In combination, the suburbs that surround them, the cars that stream into them, the packaged throwaways that stream out of them, and the fast-food outlets and convenience franchises that mimic them cause more harm to the biosphere than anything else except perhaps rapid population growth." (Alan Thein Durning, "How Much Is Enough?")

"The standard must be the health of the WHOLE community: ourselves, the place where we live, and all the humans and other creatures who live there with us. It is better, even if the cost is greater, to buy near at hand than to buy at a distance. It is better to buy from a small, privately owned local story than from a chain store. It is better to buy a good product than a bad one. Do not buy anything you don't need. Do as much as you can for yourself. If you cannot do something for yourself, see if you have a neighbor who can do it for you. Do everything you can to see that your money stays as long as possible in the local community." (Wendell Berry)

And schools and kitchens: "In large states public education will always be mediocre, for the same reason that in large kitchens the cooking is usually bad." (Nietzsche) 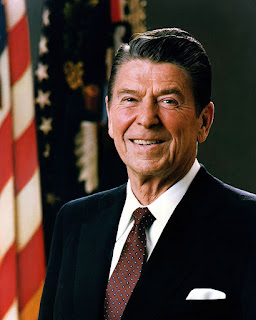 In summary: "I am calling for an end to giantism, for a return to the human scale -- the scale that human beings can understand and cope with; the scale of the local fraternal lodge, the church congregation, the block club, the farm bureau. It is the locally owned factory, the small businessman who personally deals with his customers and stands behind his product, the farm and consumer cooperative, the town or neighborhood bank that invests in the community, the union local ... It is this activity on a small human scale that creates the fabric of community, a framework for the creation of abundance and liberty." (Ronald Reagan -- five years before he became president)

This article is re-blogged from an original article by Donella H. Meadows, an adjunct professor of environmental studies at Dartmouth College. Find the link here AlterNet.
Robert Kennedy Ronald Reagan