I read an email this morning that asked me if I were a dissident of society, since I consider myself a revolutionary (re-evolutionary or re-voluntarist) which is often confused with 'dissident' so I decided to read it through. At least in my mind "dissident" is the complete opposite, so it was a psych trigger response, it is the revolutionaries that bring positive changes, dissidents are usually abstainers or objectors, they could be lots of other things too like alcoholics, pessimists, or drug addicts.

Dissidents today are also those who promote the status quo and refute positive and otherwise needed change. Have you ever heard the quote, "If you are not part of the solution then you are the problem." that would be a dissident too. But maybe dissent can be good? Thomas Jefferson said, "Dissent is the highest form of patriotism."

George Washington, Ben Franklin, Francisco Miranda, Thomas Paine and Jefferson were all great revolutionary leaders, all very liberal and progressive, the monarchs definitely saw them as dissidents. Today we enjoy modern revolutionaries including Barack Obama, George Bush, the Dalai Lama, Queen Elizabeth, and Pope Francis who have all been revolutionary in their own ways forging major global changes, among their constituencies, and with other world leaders that will affect everyone's future on the planet indefinitely. None of them were ever considered dissidents though.

The global struggle to separate the church from the state is an ongoing one, cooperative global governance remains a top-priority in the United Nations to establish global universal equality among all people. Prejudice, politics, discrimination, fundamentalism, and intolerance for personal freedoms under a global understanding continue to plague humanity. Many fear corporate governance and fascism, that's the category I fall into. 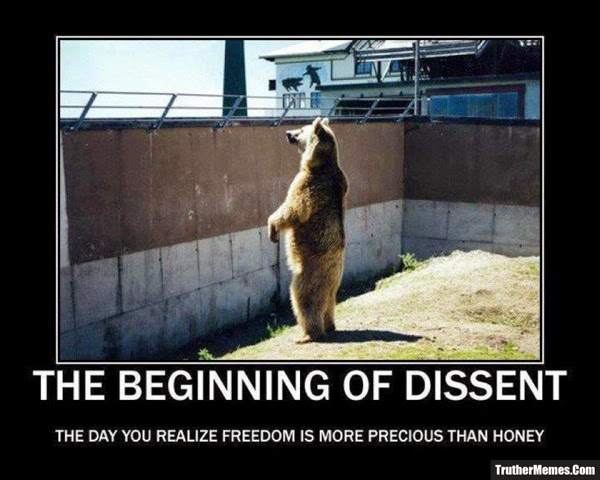 I am a goodwill ambassador not a dissident, or can I be both?

The subject line in the email read, "Are you some kind of dissident? Personally I am not, but I soon realized when reading it that many of my friends may be in some way from my perspective; this is because they are not in sync with the changes, indisposed, uninterested, or just too self-centered (ego-isolated) struggling to survive and pursue a decent life, I can't blame them for that, but I often pity them as victims of the matrix instead of its playing characters. They have little time to take to understand all the changes that are really occurring (now so quickly) in and all over the world or how our futures are connected in a single sustainable global ecosystem.

Making the change we want is required of all people living in a society or community. Being a responsible member of society also means being informed, getting involved, and showing personal goodwill!

It said in the email: "Some of us might like to call ourselves the more positive-sounding "civil society advocates" - which seems to be a label popping up at the Summit of the Americas​ now going on in Panama​. Being a "civil society advocate" is positively tame and a helluvalot less aggressive than being an "activist" or "agent of change" or than being an underground-sounding "agent of resistance", let alone being a system-changing "revolutionary"." -Sustainability Doings, Newsletter

Are you in tune with the mostly "untalked about" "big changes" occurring in the heart of all political and economic circles? Are you ready for big changes to make the world a better place?

Do you find yourself or know someone preoccupied or more worried than they should be about sports scores, fashion, and other nonsense or caught up in local political strife, religion, and over human rights at the state level? Forget about national politics, the only globally accepted laws are the new course of the day. Many years and great pain of labor developed the Universal Declaration of Human Rights, the Declaration on the Rights of Indigenous Peoples, the Declaration on Sustainable Development, they are all global treaties nations collectively have ratified under the UN that must be adhered to in order to establish the kind of world we want. It is difficult to see the sensibility of some of these perspectives like human rights, indigenous peoples, or the environment when we find ourselves embroiled and clouded in less relevant politics like who will be the next president, governor, or mayor.

All elected officials need to comply and respect the same global international laws since established whether they are Republican, Democrat, Libertarian, or from the People's Party unless they decide to separate from the rest of the world. The only change anyone can make anymore is in favor of these laws. We ratified the first Universal Human Rights law in the 1940's, nations still today have not fully complied with its measures or been able to fully implement it. Perhaps local politics has to do with expedience, which candidate will do a better job, personally I see it is a waste of time, a political official that does not do a good job will be sacked and removed by his own people. The global international system is always fair and based on pretext of many nations, best practices, equality for all people, the laws provide equal administration.

I have a strong sense for all of us to be equal in some way, with equal good fortune, and prosperity under equal collaboration and work efforts that are earnest to grow and flourish in life, no matter what country we live in. These sentiments are at the root of society everywhere within most people on the planet, it's not a national ideal. So how do we get there?

Sustainability is at the heart of all this in case you did not know! Its also the solution through international cooperation. Our global compliance with a pact made by 178 nations in 1992 called Agenda 21 and the development of a resource based economy in a balanced and ecologically sustainable planet scheme is under implementation everywhere on the earth, every nation 180 of them now as of 2012. How it is actually implemented and applied though is the controversial part, and managed under each nation, often corruptly. No matter how you look at it, you are hard pressed to understand "any of it" very well from a nationalistic perspective and may find yourself on the unfortunate or unwilling side of it with a different perspective as a "subject of the changes" we must all yield to as a dissident, instead of promoting a better tomorrow.

Change is the Only Constant

Become part of all of these changes now. Remember, "the future belongs to those who prepare for it!" Get informed, get involved, become a key person in building a balanced sustainable planet and ecosystem where there is no fear or uncertainty, let us create balance. Use your best abilities, your goodwill, to render justice personally in overseas missions and international exchange programs making the world better for everyone.

Today you can now become a global citizen or perhaps even become a goodwill ambassador through Globcal International's special programs like the "Global Citizenship Registry". Global citizenship is a legal status and process developed by Globcal providing special benefits that are available to individuals when traveling promoting goodwill through advocacy and education. It is 100% legal, provides new dual and multiple citizenship opportunities, and is exclusive through our special international pilot program being observed by the United Nations and other international organizations.

What I notice is that so many people with great skills and abilities, with grand motivations to travel and work globally feel trapped wasting their lives being held in place by family members or through obligations, debts, and financial uncertainty. I say take a chance and dedicate yourself to world service. You do not have to go on a mission right away, there are many things you should know, learn, and must prepare for.

Globcal International sees the future, a globalized future based on local cooperation at an international level, many countries, nations, states, cultures, and people all integral parts of a global world. We see well-intentioned private individuals united through a "cloud of consciousness," through many thousands of organizations effecting positive change (thinking similarly) to ease the pain of change, and giving their goodwill to make change happen.

Industrialized everything was seen many years ago as our own doom, but we were already on the roller-coaster. In 1970 we created Earth Day to be a wake-up call for our ecological downfall, for as long as we have known that we were harming the planet, corporations and governments have been on a spree to claim and dominate the world's remaining resources.

Currently we are seeking global citizens, new ambassadors, social media activists, and reform advocates to promote environmental projects involving international cooperation, ecotourism, sustainability education, and much more. Our goal is to be the change we want to see and teach others our vision.

If you think you can see the world from a different perspective, if you can maintain a non religious, non political, and nongovernmental stance over global issues please contact us and get involved. We have special opportunities for associate, annual and lifetime members with additional programs for volunteers. Be the change you want to see, be part of the future and not a subject of it; join the cooperative. To learn more write to: goodwillembassy@gmail.com

This is a commentary article by Col. David Wright, Col. Wright is a co-founder and chairman of the Globcal International Cooperative Development Commission founded in 2009 during the Summit of the Americas held in Trinidad, this month is their 6th anniversary. For more information about Globcal International or the author please use Google. Opinions and comments may be directed to goodwill@globcal.net